In the latter, you pre-prick the pattern with pairs of holes, and put in little tacking stitches. Use any thread you want. Start traveling the thread along the major diagonals, verticals, and horizontal lines of the design.

Leave one line with only 2 passes. The only lines which need only 2 passes are the lines which outline an area that will be filled with corded buttonhole stitch or some other filling stitch.

You can interrupt this 4th journey at any junction point to lay in a subsidiary line. These are not the only possible ways. But do the overcasting starting from the farthest point only to the center. From here start the final overcasting on this diagonal.

The method I used for my reticella pieces -- my 9 square design and the triangle. Some fabric threads were removed, both horizontally and vertically. Take a long thread in your needle, the same thread as what you will use for the lace stitches, and run it under the tacking stitches starting with the outer perimeter.

There are 5 parts, and here they are sequentially: Eventually somebody realized that no woven fabric was needed as a permanent part of the work.

Make an outward journey and a return journey. The boundaries of the cut areas would be stabilized in various ways with: The 3rd pass on each subsidiary line is done just before you plan to start covering that line with its final stitches -- either buttonholing or overcasting.

This will be your escape route. 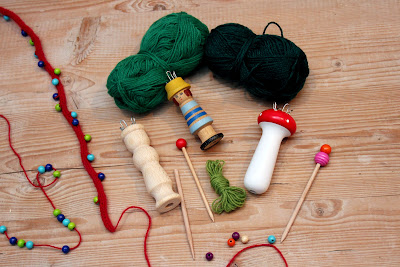 Use the same thread that you will use for the final covering of each line, because you will be covering each foundation line as soon as you have created it, and laid 3 passes along that line. So here are the pathways I chose. When you have 3 passes of the foundation thread on the upper right diagonal, start vizawrite anleitung strickliesel overcasting and subsidiary buttonholed bars.

This buttonholing or overcastting is the 4th journey and takes you back to where you started. Each major line of the design must have at least 2 outline threads on it initially.

In the lower photo, left, you can see the orange tacking stitches straddling the scaffold lnes. When you have made the 3rd pass you can start overcasting the line which just received the 3rd pass, on the way back.

Going from that same starting point again, towards the far point is the 3rd pass. So you will have a nice, substantial base for the outer edge of your lace. I find that the most difficult part. When you have all the interior lines finished you will find that the perimeter has 3 or more threads all along it.

These will be filled with solid stitches. From the center lay in 2 passes of the other major structural lines: When the overcasting reaches the center throw out foundation threads on the other major diagonal line. Initially designs were geometric, but eventually became more curvilinear.